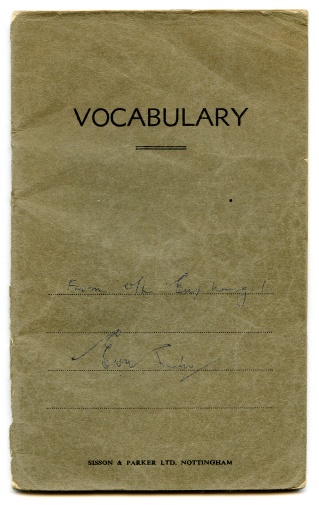 My father Eric Smith was an English master at High Pavement Grammar School in Nottingham. For many years he also served as an examiner with the University of Cambridge Local Examinations Syndicate, which is responsible for the exams sat by tens of thousands of 16- and 18-year-olds, not just in the U.K. but worldwide. His particular area was the English essay, which in the 1960s formed one half of the English Language exam for 16-year-olds (part of the then O/Level Examination, referred to in some parts of the world as School Certificate). Though he marked both British and Overseas scripts, he came to focus most on the latter, and his expertise took him out to West Africa as Chief Examiner on several occasions as part of the process of establishing proper examining procedures and standards there.

After his death in 1987 a small grey-green notebook he had kept came into my possession. In it he had been in the habit of noting down “howlers” or amusing turns of phrase from scripts he marked. Many of these come from Overseas candidates, which often adds an extra dimension to them. Apart from a few pencil marks by particular entries, which I think indicated his personal favourites, the following is an exact transcription of that notebook. (The final section headed “General” starts from the end of the book.)

From “The Only Survivor”

Back to home page